Home
Health News
To care for the health of your body and mind, don’t look to the scales

For years, weighing myself was accompanied by dread; unless the number on the scale had dropped the rest of my day was cast in a shadow of shame at the ignominy. Even a kilo or two's weight gain was enough to do it. That number was the final word on what I felt I could feed myself and how much, part a miserable cycle that offered little relief.

So, as someone whose body image cycle began with comparing her six-year-old thighs with those of her young friends, when I finally relieved myself of the burden of scales there came a sense of liberation.

Reading about nutritionist Jessica Sepel’s decision to do the same, in her new book The 12 Step Mind-Body Reset, therefore resonated.

The Sydneysider recalls how she was seven-years-old when she first looked at her small stomach and thought it was big. 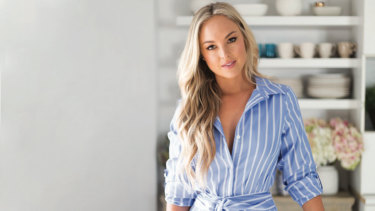 She sought reassurance from a relative but they misguidedly made the situation worse, telling her that although “a little fat and chubby”, she was still cute.

What followed was more than a decade of dieting and disdain for her body; the scales also “ruled” her life, prompting her to be “weight-conscious, not health-conscious”.

“It was during my nutrition studies at university where I finally realised how much damage I was doing to myself, both physically and mentally,” says Sepel, now 28-year. “I’d cut out so many food groups by that stage, I was basically living on salad, diet foods, tinned tuna and Diet Coke! And the more I learned about health, the more I realised how wrong my idea of the ‘healthy life’ had been.”

Her husband, Dean encouraged her to get rid of the scales; a symbol of all that is wrong in the way we see ourselves. Sepel found herself in tears.

“To my surprise, I think was crying from relief,” she says. “I no longer had to live by the numbers on the scale – having every mood and emotion dictated to me by this number.”

Throwing them away gave her body and her brain “space and time to reconnect” in a positive and intuitive way and provided the opportunity to look up from the scales and see how rigid her mindset had been.

“Obsessing over the scales is a deceptive and false representation of health, but also means we can’t tune into our bodies and what they need,” she says. “It interrupts our connection to our body, and our intuition, since we’re so focussed on what we 'should' be doing according to the scales, and not what our body needs.

“It also destroys the joy surrounding food. If we’re always counting calories to make sure the number on the scale stays steady or even decreases, we don’t eat mindfully, or with any joy. Eating becomes something we fear, and after being there myself, there is nothing more destructive.”

Some people without body image issues may find scales an unprovocative tool that keeps them accountable. But, body image is an issue for most people. It is the top concern of young people and poor body image is rife.

The fear, of course, is that without this extrinsic goal we flog ourselves towards, we will become rudderless and lose all self-control.

In his book, Atomic Habits, James Clear suggests focusing on our process in place of goals.

In this instance, the system might involve feeling healthy and caring for your body.

For Sepel, this meant starting her relationship with her body from scratch, a process she explores in detail in her book.

“I started exercising with kindness and listening to my body, ditching the hours I’d previously spent in the gym daily. I began sleeping more and felt far more energised,” says Sepel. “I reintroduced all the food groups into my diet and adopted a balanced approach to food. I allowed myself to indulge and approached eating from a place of kindness, viewing food as nourishment.

“I slowly healed my relationship with my body and with food, and realised the healthy life wasn’t the controlled, restricted life, but the balanced and nourishing life.”

As someone who has also released the heavy weight of scales and found, through a slow and imperfect recalibration, peace with food and my body, I know how far it is possible to come. It is possible to eat and enjoy food without feeling tormented or a slave to the scales.