Home
Health News
Up to 40% of 80-year-olds are sexually active, study finds

Up to 40 percent of 80-year-olds are sexually active, new research suggests.

More than half of those aged between 65 and 80 say being intimate is important for their quality of life, a study found today.

Some 73 percent of older people are satisfied with their sex lives, however, 18 percent of elderly men have taken medication to improve their performance between the sheets in the past two years, the research adds.

Dr Alison Bryant, from the elderly person’s charity AARP, which sponsored the study, said: ‘This just confirms that the need for and interest in sexual intimacy doesn’t stop at a certain age.’

Study author Dr Erica Solway, from the University of Michigan, added: ‘Sexual health among older adults doesn’t get much attention but is linked closely to quality of life, health and well-being.’ 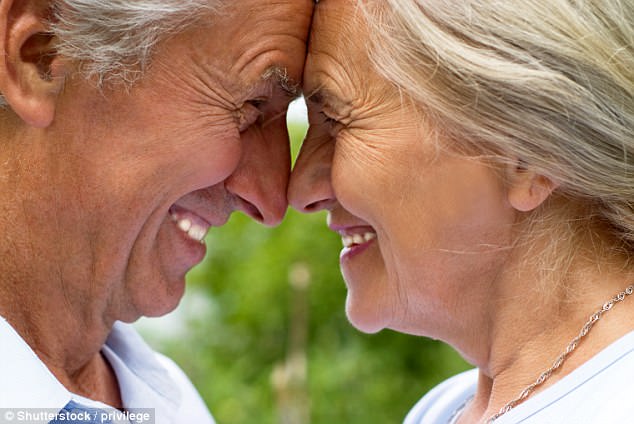 Up to 40 percent of 80-year-olds are sexually active, new research suggests (stock)

A brain chemical that fuels sex drive and could help women achieve better orgasms was discovered in January 2018.

Kisspeptin, which is better known as the ‘kiss hormone’, has previously been linked to puberty and fertility, but new research suggests it could benefit women suffering from extremely low sex drives, or hypoactive sexual desire disorder (HSDD).

Testosterone is sometimes given to improve women’s desires between the sheets, however, this can cause ‘male’ side effects, including facial hair and a deeper voice.

‘The discovery that kisspeptin controls both attraction and sexual desire opens up exciting new possibilities for the development of treatments for low sexual desire.’

HSDD is thought to affect up to 40 per cent of women at some point in their lives in the US and UK. Five-to-15 per cent suffer continuously.

The researchers discovered kisspeptin drives both attraction and sexual behavior in female mice.

They also found that pheromones, the chemical scents animals give off, are secreted by male brain cells, which transmit a signal to other nerve cells, known as neurons.

The neurons also transmit this signal to cells that produce the neurotransmitter nitric oxide, which triggers sexual behavior.

Mice were chosen as the nocturnal animals heavily rely on pheromones to identify partners.

Results further suggest that, of those in excellent, very good or good health, 45 percent are sexually active compared to just 22 percent who are in fair or poor health.

People between the ages of 65 and 70 are nearly twice as likely to be sexually active as those in their 70s, with one-third of these younger people being extremely or very interested in being intimate, compared to just 19 percent of septuagenarians.

Older women are less likely to be sexually active with only 31 percent getting intimate compared to 51 percent of men of the same age.

Half of men aged 65-to-80 are extremely or very interested in sex versus just 12 percent of women.

Findings also show that just three percent of elderly women have taken drugs or supplements to boost their sexual function.

Some 17 percent of older adults have spoken to their doctors about sexual health in the past two years and are usually the ones to bring the topic up.

The researchers believe their findings highlight the need for healthcare professionals to talk more openly with elderly patients about sexual health.

Dr Solway said: ‘It’s important for older adults and the clinicians who care for them to talk about these issues and about how age-related changes in physical health, relationships, lifestyles and responsibilities such as caregiving, affect them.’

The researchers surveyed 1,002 people aged between 65 and 80 on their sex lives via an online questionnaire.

The findings were published on the National Poll on Health Aging website.

Having sex once a week slows ageing in women

This comes after research released last month suggested having sex at least once a week slows ageing in women – even if they do not enjoy being intimate.

Being active between the sheets increases the length of women’s telomeres, a study by the University of California, San Francisco, found.

These ‘cap’ the end of DNA strands, with longer lengths being associated with slower aging, longer lifespans and improved overall health.

Women’s telomeres lengthen with regular love making regardless of whether they are sexually satisfied in their relationship, the research adds.

Researchers believe sex may aid aging in women by dampening stress and boosting their immune system.