Why a $20 diabetes drug extends lifespan and boosts overall health: Scientists unlock secrets of a common pill that could become a blockbuster

Scientists have found further evidence that a cheap diabetes drug may help to slow aging and boost overall health.

Metformin, the most commonly-prescribed drug for type 2 diabetes, has long been co-opted as an unofficial anti-aging pill thanks to animal studies that showed it extended lifespan and boosted metabolism.

But it has down sides – such as hindering stamina during exercise – and scientists hoping to improve it have faced a fundamental roadblock: it’s not clear exactly how metformin works, and how its benefits can be harnessed in a new drug without the down sides.

Now, US researchers have offered an answer: metformin inflicts mild stress on the body, triggering sensors to restore metabolic balance that can swing off-kilter with age.

The findings, published today in the journal Cell Reports, give a boost to scientists who want to repurpose the $20 diabetes drug as a better anti-aging pill, and for those trying to improve the drug for the growing number of people with type 2 diabetes. 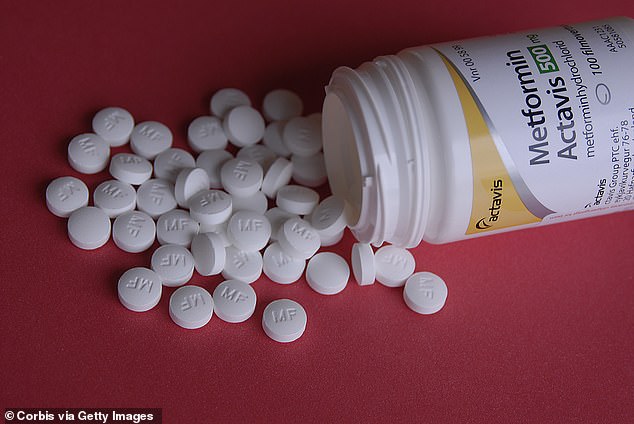 ‘These results provide us with new avenues to explore in order to understand how metformin works as a diabetes drug, along with its health-span-extending effects,’ says Professor Reuben Shaw, co-corresponding author of the paper and the director of the Salk Institute’s Cancer Center.

‘These are pathways that neither we, nor anyone else, would have imagined.’

But over the years, animal studies have shown anti-aging benefits, too.

While countless anti-aging supplements and drugs pile onto the market every year, with little evidence to support it, the National Institutes of Health has shown willingness to properly investigate whether metformin could be approved as an anti-aging drug.

Part of that funding has gone to the scientists at Salk, working with The Scripps Research Institute and Weill Cornell Medical College.

They believed more pathways than AMPK might be involved. If they could map out all the pathways, they hoped, it could help them and others to improve the drug, trying to harness its benefits without its down sides.

For example, a study earlier this year by the Oklahoma Medical Research Foundation, Colorado State University and the University of Illinois found that metformin helped to fight aging, but affected participants’ fitness. Those who took metformin, versus a placebo, saw 50 percent less progress in their endurance.

To investigate metformin’s properties closer, the Salk team developed a new screening technique to get a closer look at kinases, a collection of proteins that control the on-off switches in cells. Those proteins can be controlled by metformin.

The researchers were able to map out all the different switch-flips that occur in the body when metformin is influencing the kinases.

They found that metformin turns on unexpected kinases and pathways, many independent of AMPK.

In particular, they found two poorly-understood kinases (Protein Kinase D and MAPKAPK2) that seem to influence lifespan and good health.

‘We never imagined these two kinases would have anything to do with metformin,’ says Shaw.

‘The results broaden our understanding of how metformin induces a mild stress that triggers sensors to restore metabolic balance, explaining some of the benefits previously reported such as extended healthy aging in model organisms taking metformin.

‘The big questions now are what targets of metformin can benefit the health of all individuals, not just type 2 diabetics.’

The findings provide a significant step towards recognizing metformin as a medicine that could be prescribed to treat age-related disease.

If metformin were to be approved by the FDA for ‘aging’ people, the entire population would qualify for the drug.

But that brings questions of safety, and demands a closer look at the potential side effects, such as stomach issues or liver and kidney problems in elderly patients.