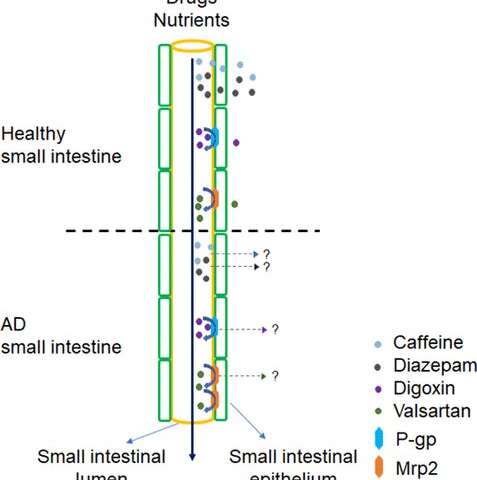 Patients with Alzheimer’s disease (AD) are often prescribed drugs for other conditions—including diabetes or high blood pressure—at the same doses as those without dementia. That practice might need to be reexamined in the wake of new mouse studies reported in ACS’ Molecular Pharmaceutics. The findings suggest that AD could alter absorption of medications from the digestive tract, so dosages might need to be adjusted for these patients.

Because AD is primarily considered a disease of the nervous system, scientists have mostly focused on its impact on drug uptake across the blood-brain barrier (BBB). Their research revealed that the quantity and function of proteins that transport drugs through the BBB are altered in people with AD. Less attention has been given to other biological barriers, such as the intestine’s lining, through which oral drugs pass into the bloodstream. The few small studies published on this subject, however, suggest that this absorption process may be disrupted in AD. Joseph A. Nicolazzo and colleagues wanted to know if these changes could occur with drugs commonly prescribed to AD patients.

Tags: Alzheimer's, changes, conditions, dosing, for, in, may, medicines?, need, other, patients, prescribed
You may also like