Researchers at Georgetown University Medical Center have successfully used molecules comprised of small strands of RNA to shut down the production of destructive proteins generated by the COVID-19 virus. Additionally, the researchers are working to aerosolize the RNA molecules so that they could be incorporated in an inhalable drug that would mitigate viral chaos. The finding appears online today in Gene Therapy.

A key to the Georgetown research efforts was the use of either microRNA (miRNA) or silencing RNA (siRNA, also known as small interfering RNA), both of which are RNA molecules. These molecules can guide the ultimate expression of how protein production occurs in a virus. And it is the proteins produced by SARS-CoV-2 (the virus that causes COVID-19) that wreak havoc in people.

SARS-CoV-2 bears biological similarities to other respiratory viruses, such as the seasonal flu. The use of Tamiflu (oseltamivir) to treat and prevent infection from the flu has proved to be helpful in lessening flu symptoms and its lethality in some people.

“We believe that our approach suppresses viral protein production and could be used against virtually any respiratory virus,” says G. Ian Gallicano, Ph.D., associate professor in the Department Biochemistry and Molecular and Cellular Biology at Georgetown University Medical Center. “Because of our results, Georgetown University has filed a patent application on on the siRNA sequences that were shown to have the best effect on viral protein suppression.”

Another key to the researcher’s effort was the fact that miRNAs and siRNAs can be made fat-soluble, making them more easily absorbed using sprays into nasal passages lined with mucous membranes. Non-soluble fat compounds have been found to irritate nasal passages if inhaled.

While Tamiflu is a pill that can help control the flu, the Georgetown researchers’ proposed drug has a tougher disease to try to control and thus its mechanism of action would be different. An aerosolized RNA-targeting agent against SARS-CoV-2 would interfere with the production of the protein spikes associated with the infectivity of the virus and thereby reduce subsequent viral spreading.

The scientist’s viral strategy is based on research Gallicano and his collaborators have been conducting to treat heart failure, which uses miRNA to target genes that can affect the heart’s ability to function well. Modifying this cardiac approach, the researchers showed that miRNAs and siRNAs can target messenger RNA inside a virus. As SARS-CoV-2 uses messenger RNA to generate the proteins necessary for multiplication and infection, the ability to target viral machinery within cells via siRNA, in particular, could help shut the virus down, noted Gallicano.

The scientists tested their approach using two types of cells in the lab, including one type of cell from a human windpipe (trachea). Against tracheal and non-tracheal cells, the researchers used siRNAs and found that they could suppress protein function in a dose-dependent manner, which they subsequently found was due to messenger RNA degradation.

The researchers investigated if miRNAs and siRNAs would shut down production of proteins vital to a healthy cell. Through a series of experiments, they found that there were fewer ‘off-target’ effects using siRNA compared to miRNA; off-target effects can cause normal cells to go haywire.

Tags: aerosolized, COVID-19, destructive, Down, molecules, proteins, Shutting, virus, with
You may also like 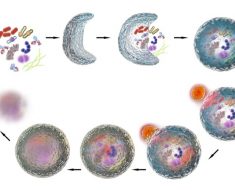