Oh my COD! Cutting down fish and chips to just 600 CALORIES could combat obesity crisis as study shows customers enjoy the smaller portions

Fish and chips can be enjoyed without your waistline taking a battering, a study found.

Experts believe offering smaller versions of our favourite take-away meals could be key to reducing levels of obesity.

They teamed up with a fish and chip supplier to develop a portion with around 600 calories – 1,000 less than a traditional serving and in line with national guidelines for mealtimes. 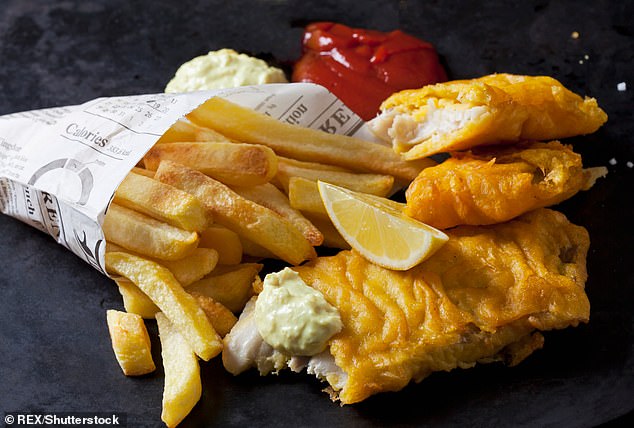 These were then offered at a dozen fish and chip shops in the North-East alongside their normal menus.

Takeaway owners were given a three-hour briefing on excessive portion sizes and how market research had shown many customers wanted to be more health conscious and have smaller meals.

They were supplied with promotional posters and business incentives of free packaging and customer loyalty points.

HOW THE GOVERNMENT IS TRYING TO STOP OBESITY

Proposed plans to restrict the number of calories in pizzas, pies and ready meals were last year revealed as part of drastic Government moves to try and cut down on obesity.

A tax on added sugar in drinks came into force in April, requiring companies to hand over more of the money they make from drinks which contain more than 5g of sugar per 100ml of liquid.

As a result, many soft drinks have had their recipes changed in order to avoid paying the tax and putting prices up. Sugary drinks are the biggest single source of sugar for children and teenagers.

The Government is also considering making it compulsory for all restaurants and fast food outlets to display the number of calories in each meal on their menu.

Some food outlets already do this but there can be unexpected numbers of calories in popular dishes, and the Government is consulting on the plans before a decision is due in spring.

In March this year, Public Health England warned Brits to crack down on the number of calories they’re eating, advising people to consume no more than 1,600 per day.

The watchdog says adults shouldn’t eat any more than 400 calories for breakfast, 600 for lunch and 600 for dinner – this would allow for some snacks, experts said.

Examples of 600-calorie meals include a tuna pasta salad and a small cereal bar, a chicken salad sandwich and a pack of crisps, or half a pepperoni pizza with a quarter of a garlic baguette and a banana.

The meal boxes, called Lite-BITE, consisted of a 5oz (142g) fish and 5oz of chips, fried in vegetable oil and typically cost customers about £4 – around £1.60 less than the full-size versions.

The study found one in five people bought the smaller alternatives while four in ten said they would consider scaling down.

Secret-shoppers, customer surveys and interviews indicated that customers were pleased with the smaller portions and takeaway owners were happy to sell them.

Public Health England wants adults to eat no more than 400 calories for breakfast, 600 for lunch and 600 for dinner.

But the rising number of fast food outlets has been blamed for fuelling the obesity crisis, with two thirds of adults and one in three children now overweight or obese.

Last year it was revealed that the number of fast-food outlets has increased by a third in eight years and is at its highest level since figures were first compiled in 2010.

Lead author Louis Goffe said: ‘The independent takeaway sector is one of the most challenging food sectors to work with to make changes.

‘This research emphasises the importance of working with wholesale suppliers, who have a strong relationship with traders, to improve the health benefits of hot food takeaways.

‘The sales show that there is a demand for smaller portion meals and we hope this will act as a template for others in the fast-food sector to follow.’

In proposed Government plans, calories are set to be capped on our favourite treats across the board.

Limits on ready meals, crisps, chips, biscuits, sandwiches, cooking sauces, soups, burgers and processed meats, among other food products are to be revealed in the spring.

The drastic guidelines from Public Health England state pizzas should contain no more than 928 calories and pies should be capped at 695.

The move is part of the PHE’s target to reduce calorie counts in every day foods by 20 per cent by 2024, as around a quarter of adults and a fifth of children are obese in the UK.

In a major obesity crackdown, a tax on sugary drinks, a ban on two-for-one deals on junk food and adverts on London’s public transport has been implemented.

HOW CAN YOU CUT CALORIES IN YOUR FAVOURITE TAKEAWAY?

Try to avoid: thin-cut chips, pies such as cheese and onion or steak and kidney, and jumbo sausages.

Healthier options: small or medium pizzas with a thin base and vegetable or lean meat topping, tomato-based pasta sauces, bruschetta.

Try to avoid: any creamy curries, such as korma, passanda or masala with pilau rice, naan, bhajis, pakoras and poppadoms.

Try to avoid: large doner kebab with mayonnaise and no salad, burgers with cheese and mayonnaise, thin-cut chips, chicken or fish patties deep-fried in batter.

Healthier options: shish kebab with pitta bread and salad, grilled burgers made from lean fish or meat (beef or whole chicken breast) and without cheese and mayonnaise. 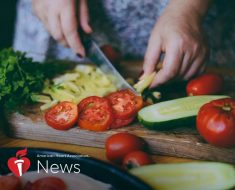 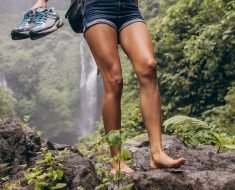 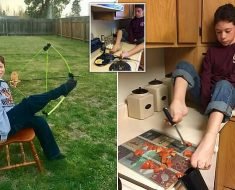