Keen snowboarder, 38, discovers the lump in her abdomen she thought was a ‘hernia’ is stage four bowel cancer

A keen snowboarder discovered that what she thought was a hernia was stage four bowel cancer.

Heidi Cresswell, 38, from Great Braxted, Essex, found a lump in her abdomen one morning in the autumn of 2016.

The magazine journalist visited her GP, considering she had also been feeling ‘under the weather’, but was sent straight to hospital.

Within a week, her and her husband, Peter, 37, had been given the news she had stage four bowel cancer which had spread to the lymph nodes.

Surgery to remove 2.2lbs (1kg) of cancerous bowel left Mrs Cresswell with a stoma bag – which collects faeces on the outside of the body in a pouch.

However, the disease returned in July 2018. Chemotherapy is currently keeping the disease at bay but further surgery is planned to tackle her cancer.

Mr and Mrs Cresswell decided to begin IVF before she began chemotherapy when the disease returned, in the hope of one day having a child. She revealed she now has two embryos frozen, as she hopes one day she can start a family ‘when this is all over’. 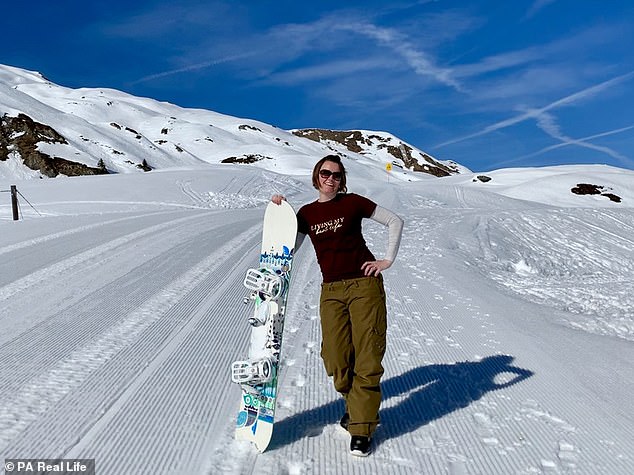 Heidi Cresswell, 38, of Great Braxted, Essex, found a lump in her abdomen one morning two years ago but thought it was a hernia. Pictured in January this year, still in treatment 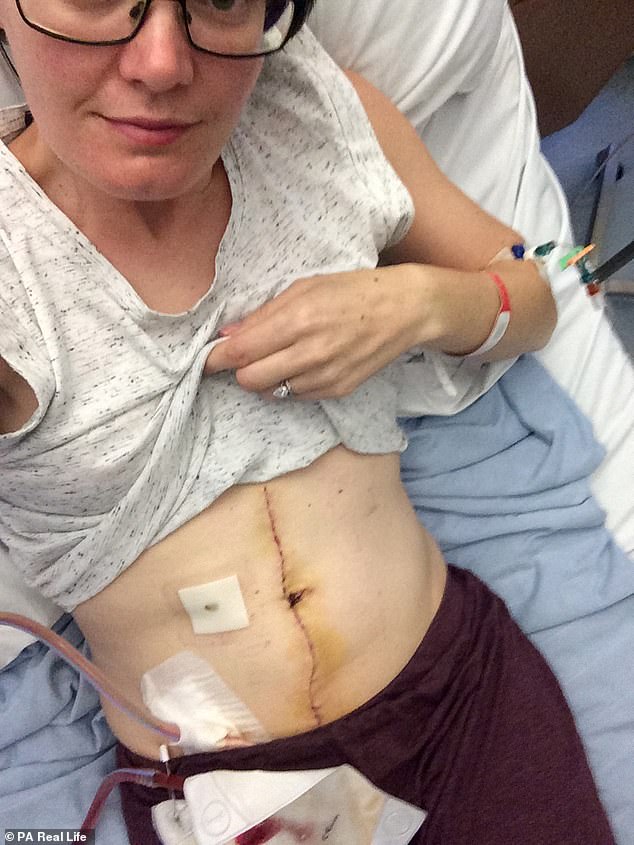 A week later, the journalist was given a stage four bowel cancer diagnosis and left with a stoma bag – which collects waste in a pouch outside the body. Pictured, after surgery in September 2016 to remove 1kg of cancerous bowel 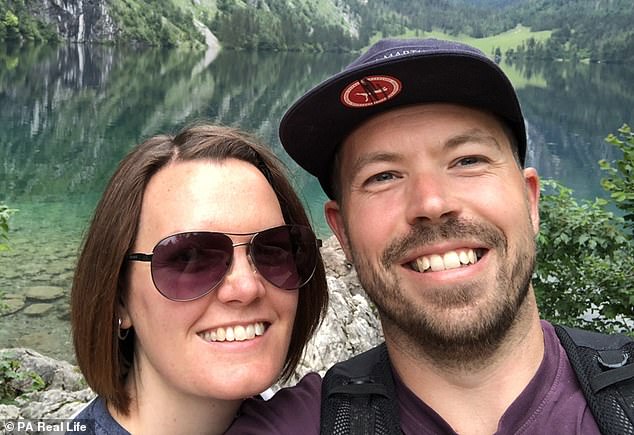 For a year she was cancer free, until the cancer returned in July 2018, leaving Mrs Cresswell and her husband, Paul, 37, to have IVF in the hope of one day having a child. Pictured, in the summer of 2018 before knowing the cancer had returned

Speaking of her initial symptom of cancer, Mrs Cresswell, who is also an avid cyclist, said she wasn’t too concerned by what she believed to be a hernia.

A hernia is caused by an internal part of the body pushing through a weakness in the muscle or surrounding tissue wall.

Mrs Cresswell said: ‘I’m quite sporty and thought maybe I’d given myself a hernia, as I knew they could be caused by physical exertion.

‘I’d been feeling under the weather – a little bit feverish and not quite right – but I thought maybe I was just coming down with the flu.’

Mrs Cresswell, who lost both sets of her grandparents to cancer, never believed she would be diagnosed herself.

She said: ‘As I heard those words, I felt like the room had started spinning.It was just a surreal moment and at one point I thought I was going to black out.

‘Yes, my grandparents had cancer but they were all in their 80s – not my age. The diagnosis was a huge shock. I just wasn’t expecting it.’ 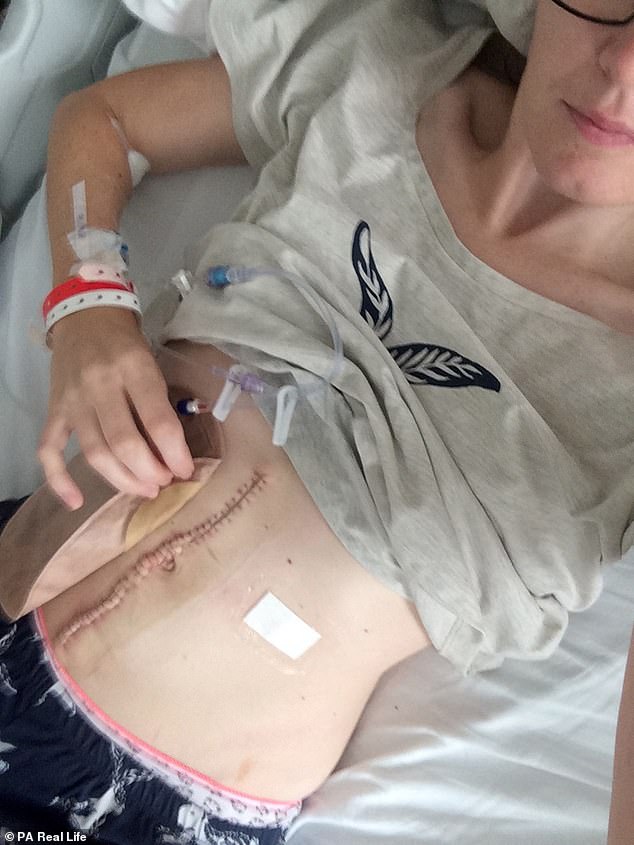 Mrs Cresswell’s had three further operations and eight rounds of chemotherapy over the next six months, was a success. Pictured, Ms Cresswell’s stomach after the first operation 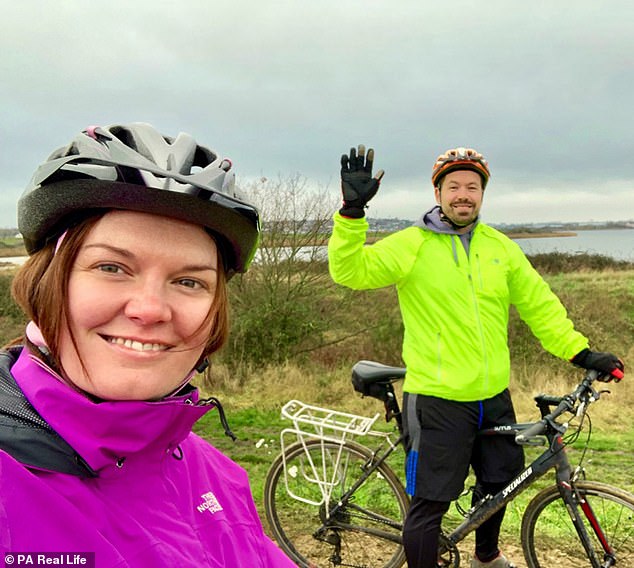 Mrs Cresswell, pictured cycling with Mr Cresswell, an IT consultant, thought she had a hernia because she is sporty, a common cause. Pictured in December 2018 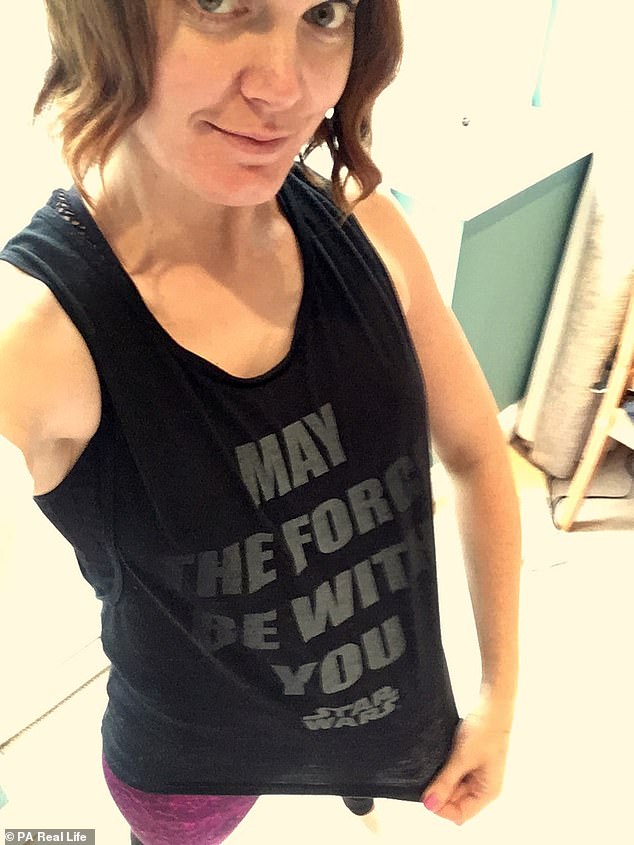 Mrs Cresswell was shocked to be given a bowel cancer diagnosis so young. Pictured, before while at the gym

According to Bowel Cancer UK figures, more than 41,200 people are diagnosed with bowel cancer every year in the UK.

It affects around 40 per 100,000 adults per year in the US, according to the National Cancer Institute.

Traditionally, the killer disease – which is mostly preventable – is considered to only strike people who are over the age of 50.

But more and more people in their 20s and 30s have been getting diagnosed with colorectal cancers.

Mrs Cresswell had surgery to remove 2.2lbs of cancerous bowel at The London Clinic on Harley Street in September 2016.

She said: ‘Before the surgery, I was told there was a very low chance I would have a stoma.

‘But I remember coming to from the operation and hearing one of the nurses saying, “She’s got a stoma”.

‘I started crying because I just didn’t know how I was going to deal with it. It’s just not something you expect to have as a young person.’

Mrs Cresswell said: ‘It was so difficult to come to terms with the fact my waste would be in a bag, which I would have to wear all the time and deal with making noises in the middle of the cinema.

‘But actually, I did get used to it. It does become a normal part of life.’ 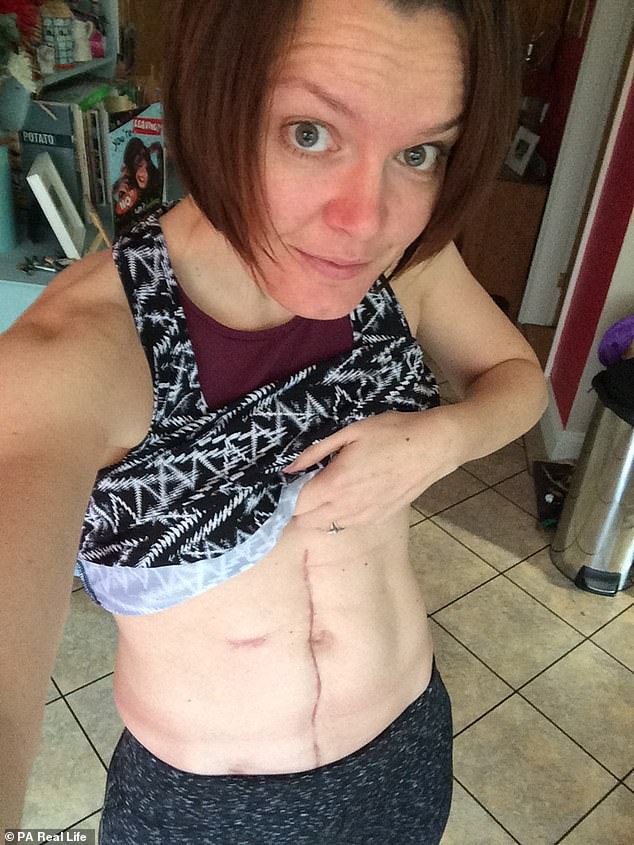 Ms Cresswell also needed surgery when an infection turned part of her bowel gangrenous. Pictured, showing her scar from the surgery 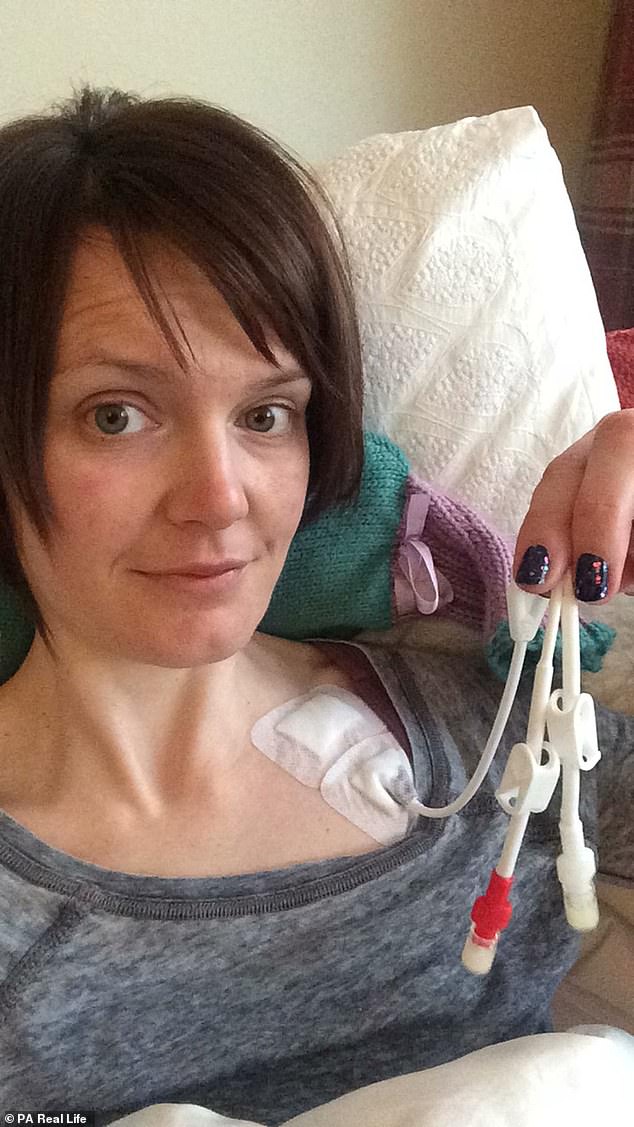 Mrs Cresswell suffered a punctured lung caused by the routine insertion of a Hickman line to deliver the chemotherapy drugs, pictured 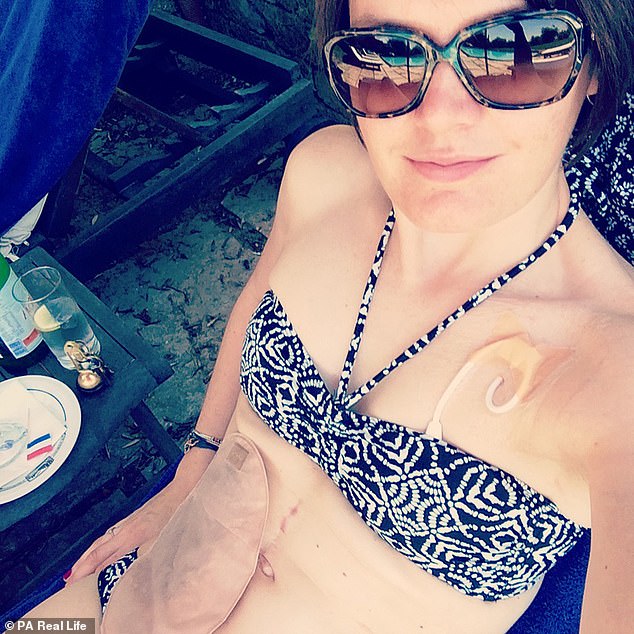 Mrs Cresswell cried when she woke up with a stoma bag, which has now been removed

Mrs Cresswell’s treatment, including two further operations and eight rounds of chemotherapy over the next six months, was a success.

Following the third bowel operation in July 2017, her doctors declared that she was cancer free and, to her relief, took away her stoma bag.

Sadly, however, her relief was short-lived, because, just a year later in July 2018, a routine CT scan showed the cancer was back and her treatment resumed.

More surgery was planned to remove any remaining lymph nodes that contain cancerous cells. She will go under the knife for that procedure in May 2019.

‘There is not as much cancer this time, so we started with chemotherapy, which is working,’ Mrs Cresswell said.

One of the ways Mrs Cresswell dealt with her cancer treatment was by heeding her husband’s advice to be stubborn.

She explained: ‘Peter is my rock, but I didn’t know how he was going to get through it all, so I was crying one day and apologising for putting him through such an ordeal.

Mrs Cresswell’s gruelling treatment also left her needing additional surgery after an infection turned part of her bowel gangrenous, and she suffered a punctured lung caused by the routine insertion of a Hickman line to deliver the chemotherapy drugs.

Throughout the past two years, Mrs Cresswell has dreamed of returning to work and to writing. 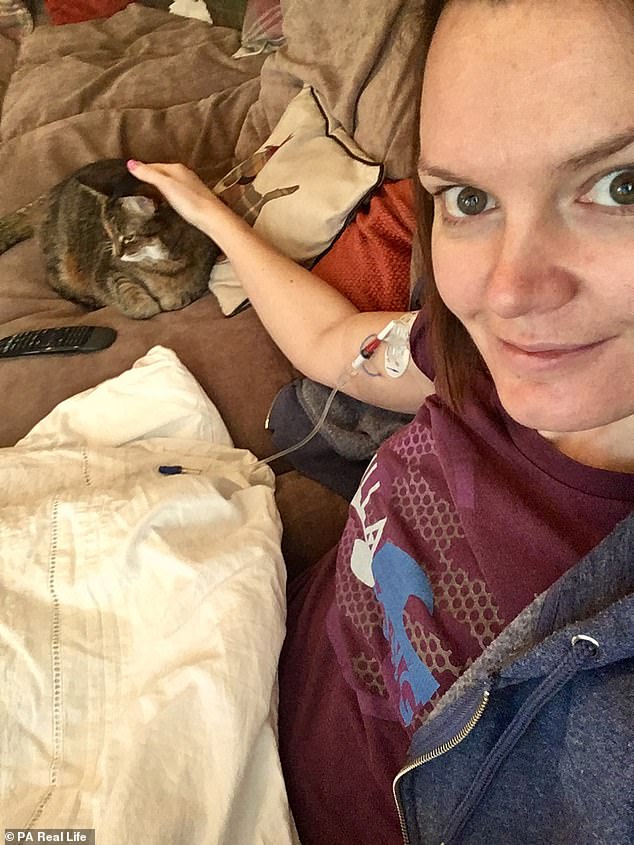 Mrs Cresswell, pictured while having chemotherapy at home with her cat, has said her mental health has suffered and doctors have said she has post-traumatic stress disorder 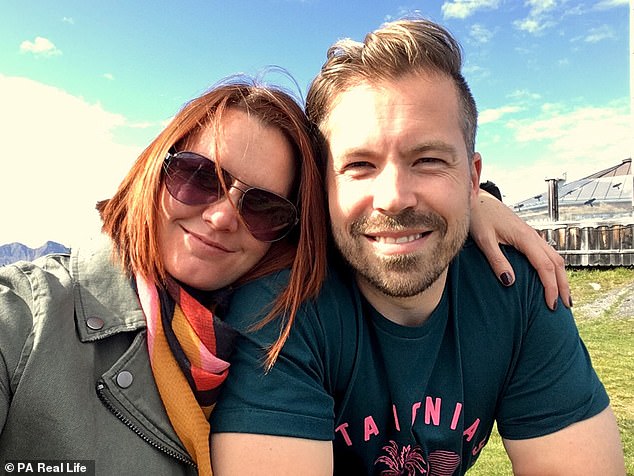 Mrs Cresswell says her husband, pictured, has been her rock. Together in 2018 before starting chemotherapy when her cancer returned 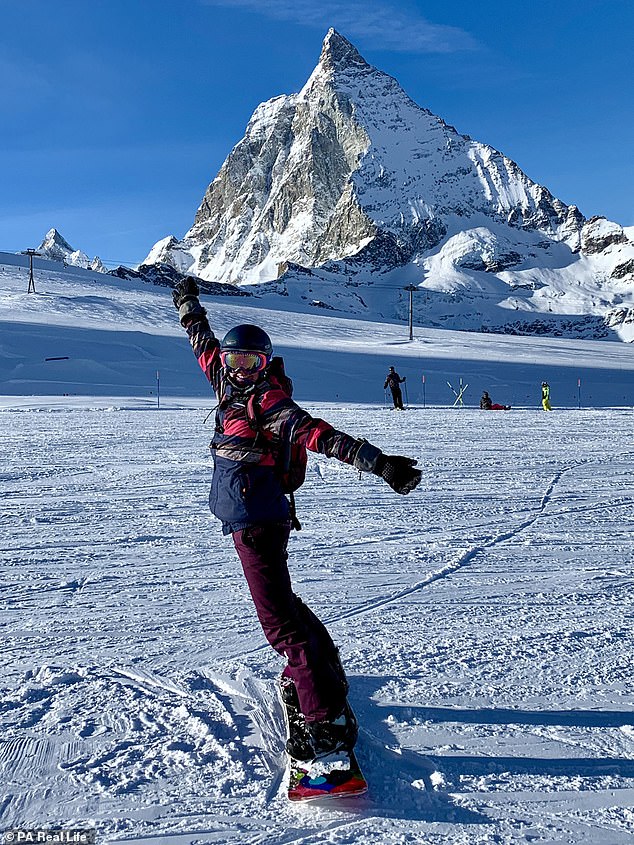 Mrs Cresswell, pictured in January 2019, said she has been ‘stubborn’ to deal with the cancer on the advice of her husband

She struggled mentally with the threat of her cancer returning, and has used a diary online to combat the stress.

Mrs Cresswell said: ‘People talk a lot about the treatments and the diagnosis, but nobody talks about what it all does to your mental health.

‘When I was told I was cancer free, instead of being elated I was depressed and really struggling to find a life past all the treatment.’

She added: ‘One of the doctors told me it is a form of post-traumatic stress disorder, but it’s not something that gets talked about and it should be.

‘When you’re so ill and having treatment, you can’t face reading long articles about the condition and how to cope, so I sort of boil it down to a shortened version of what’s happening.’

Mrs Cresswell, who is speaking out during April’s Bowel Cancer Awareness Month, hopes to publish as a book as well as writing a blog called Five Things About Cancer.

‘It includes what you need to know and how I am living with bowel cancer.

‘It can feel very lonely going through cancer. Even when you have fantastic support like I have, you do still think nobody else knows what you’re going through.

‘The mental strain is enormous and not something people really talk about, which is what I really want to change. That and encouraging more awareness that a cancer we think only older people get can affect younger people, like me, too.’

WHAT IS BOWEL CANCER AND WHAT ARE THE SYMPTOMS?

Bowel, or colorectal, cancer affects the large bowel, which is made up of the colon and rectum.

Most cases have no clear cause, however, people are more at risk if they:

More than nine out of 10 people with stage one bowel cancer survive five years or more after their diagnosis.

This drops significantly if it is diagnosed in later stages.

According to Bowel Cancer UK figures, more than 41,200 people are diagnosed with bowel cancer every year in the UK.

It affects around 40 per 100,000 adults per year in the US, according to the National Cancer Institute. 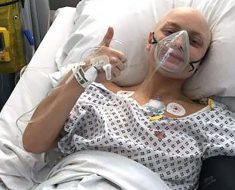